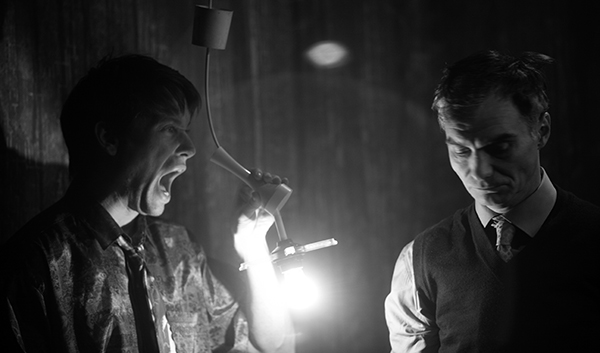 The debut of playwright Patrick Marber, best known for his plays Closer and Howard Katz.

The employees of one London restaurant meet every Sunday in the restaurant basement for a round of poker. One day a mysterious man, who turns out to be a professional poker player, turns up. The restaurant owner invites him to the poker table. A tense round of poker starts where cards aren’t the only issue at stake.
The 1995 staging of the play, directed by the author, won the prestigious Evening Standard Award in theatre for Comedy of the Year.

“Marber is a unique author. I wouldn’t say that he’s the best, but he is a genius. His plays deal with issues that I have to deal with in my own life. Social frustration is the inability to confront the state with the injustice that occurs.”
Jiří Pokorný in conversation with Český rozhlas

“I like that British sharpness, that ability to talk about things as if they’re calm, while being incredibly tense inside.”
Václav Neužil (‘Mugsy’) in conversation with radio station Český rozhlas