If one wishes to be a king, one has to act now! 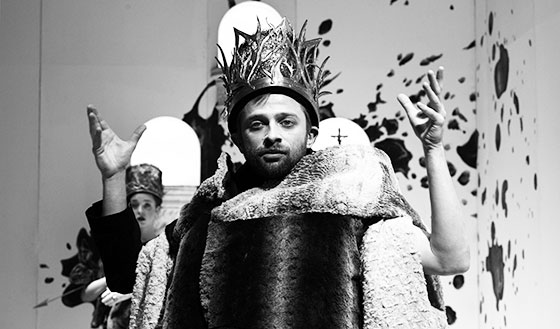 “Why Richard III? It’s our very first collaboration with this theatre company and so we were looking for a well-known text which speaks to the imagination and, at the same time, is current in an unimposing way. We were hungry for a classic. Shakespeare fulfils all this and, moreover, Richard III is a fantastic play full of black humour which we hope to preserve through our rehearsals.”
SKUTR (Lukáš Trpišovský and Martin Kukučka)

The directors’ duo chose Lukáš Příkazký for the title role of the Duke of Gloucester.
“From the outset we agreed not to go for the hobbling, hunchbacked freak. Limping are his morals, crooked is his character and hideous his mind. A master of pretence. Inscrutable. A cold-blooded murderer,” is Příkazný’s own assessment of how his rendition of Richard III should be.

“On a road to power that is littered with corpses, the main protagonist in this famous tragedy by William Shakespeare disposes of his opponents in a thoroughly cynical fashion, which infuses the drama with a certain farcical quality. Richard’s fiendish wickedness is so patently obvious that it defies common sense. And that is the aspect that SKUTR builds on in their rendition, opting for a coarsely mocking style which best expresses the play’s unhinged course of events. They are constantly testing the limits and, somehow, it works; it is like walking a tightrope – one misstep and it would all plummet into overblown hysteria.
For most of Shakespeare’s dramas based around a powerful central figure, failing to find a suitable performer to take on this role will, of course, render it extremely difficult to stage the play in the first place. And in this respect too, SKUTR was dealt a lucky hand. Lukáš Příkazký equipped Richard with a mixture of smooth-tongued smarminess and amusing cynicism. It’s a study of an ambitious scumbag who won’t be stopped by anything but whose motifs are really a mystery. A question mark remains over why he craves power and why he murders to attain it. This aspect has a very contemporary feel to it without being exploited by the director to pander to the audience.
Richard III has turned out well in Dejvice. The play is very derisive, grotesque, almost disjointed but it sticks to its style and stays on track, showing that while evil may even make a comical impression, this does not diminish its monstrosity, the more so when the motifs of those applying it remain incomprehensible.”
Jana Machalická, Lidové noviny