The Elegance of the Molecule / Petr Zelenka

Three molecules and three men with a vision, willing to take risks 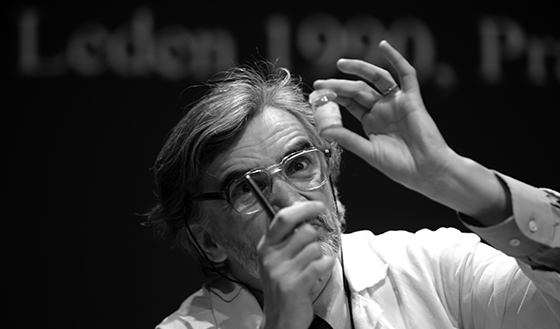 A chemical laboratory is often just a few hundred metres away from the pharmacy on the corner. But on this journey, a molecule of a medicine passes through hundreds of millions of dollars worth process on which thousands of people participate. That is to say, the one molecule lucky to reach the finish line. The Elegance of the Molecule tells a story of three such substances and their three “fathers”, one of them being professor Antonín Holý, a Czech chemist genius. The play deals with the genesis and the dramatic industrial development of substances produced by Czech chemical laboratories that are used today by more than eighty percent of AIDS patients all over the world.
Otto Wichterle had his famous story about constructing a Merkur (a construction set for children built in Czechoslovakia) based apparatus for experimental production of his first soft contact lenses. Petr Zelenka's play is looking for a similar “Merkur” in the life of Antonín Holý.

A story about a strong vision, prescience, luck and a reward that came too late.

The production was supported and financially funded by the Neuron Benevolent Fund for Support of Science.