A play about a man returning home 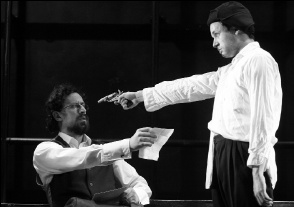 Prince Myshkin travels from Switzerland to Petersburg. By happenstance and circumstances he has to interrupt the journey and thus.

I’m often asked why so much Russian classic. But I think that if Dostojevskij is in the repertory twice, and each time he is seen differently, it is an advantage and an interesting confrontation at the same time.
Miroslav Krobot

…Subtitle of the work is brief and the entire production is similarly material, however full of meanings and secrecies. The director filled up his own words, according to which he did not want to bring up the Idiot to date at the visual level, but at the level of thinking and acting of his characters. May be it sounds evidently, but it uses to be quite the contrary in the today’s theatre. /.../ We can hardly talk about the principal and the supporting characters, the much less we can talk about positive and negative heroes. Strangers, at the end primarily helpless and dispossessed personalities, jostle one to another like skittles in quest of keeping to something. If we perceive the character of Idiot as the main character, then it is especially because he is stranger here, at the beginning at least, by which he is different – which is emphasized by Pavel Šimčík by means of temperately informal, almost “non-dramatic” display that makes the Idiot to be a kind of “man without qualities”, who we can idealize and disgust as well…
Terezie Pokorná, Respekt

…It is surprising how the adaptation does well without many heroes, who appear in the novel as unsubstitutable. Krobot also preserves the story line of the novel, but lops it to its bone without pulping it or bringing it to superficiality. He shortens and omits various things and what he uses again connects to unexpected contexts and contrasts. The Dostoyevsky’s novel is taking place on the stage, but it seems that a completely new quality is arising here. Another, purely present, brusque and mercilessly open testimony on human nature and positive and negative feelings, disregard and passion arises on strong basis of the old story…