Right You Are (If You Think You Are) / Luigi Pirandello 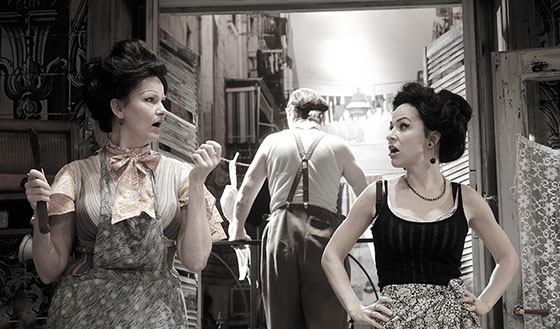 The truth can take various forms: Absolute, relative, partial, whole, bitter, great… And everyone has their own truth.

This is a comedy about how we often lose ourselves searching for our own, often insignificant, truth whilst something much more important keeps eluding us. And yet, E = mc² still applies.

This play by Luigi Pirandello, one of Italy’s greatest playwrights and a Nobel Prize laureate for literature, is part of what would become known as the Theatre-in-the-Theatre trilogy (to which the titles Six Characters in Search of an Author and Tonight We Improvise were later added).
We would like to bring to your attention that, in line with the director’s conception for the play, there will be intermittent smoking on the stage.

“… Director Michal Vajdička has managed to discover a current theme in a text that is over a hundred years old and to place it in a suitable scenic form in this crazy, over-the-top comedy.
The Italian playwright Luigi Pirandello /.../ professed the philosophy of relativism, questioning the existence of a single truth and the possibility of discovering it. In his play, the new town clerk, Mr. Ponza, is allegedly imprisoning his wife and preventing her from seeing her mother. Moreover, it is not even clear whether it is really her daughter. And last but not least, whether Ponza or his mother-in-law are actually insane.
Vajdička has socially shifted the story from high society to sweaty small-town conditions, from the drawing room to a kitchen with falling tiles, where the characters in casual, plain clothes literally trip over each other, and everything takes place on the ground plan of one unfinished lunch.
The fact that right now Mussolini’s fascists are coming to power outside the kitchen windows and the world is heading towards destruction is of absolutely no interest to these people, preoccupied as they are with their local scandal. The analogy with today’s consumers of tabloids, reality shows, social networks and other such glitz is more than obvious.
Vajdička leads the actors to the very limit of farcical expression whilst keeping it tolerable. Klára Melíšková’s Mrs. Amalia takes it the furthest, her voice, in moments of excitement, drifting into almost supersonic registers and her movements becoming uncontrollable (in which she is by no means inferior to Lenka Krobotová’s Mrs. Sirelli).
Hynek Čermák, as Mr. Sirelli, gives a brilliant caricature of a bumpkin, Jaroslav Plesl visibly enjoys playing the sardonic teaser Laudisi and in the end Ivan Trojan cuts a bizarre drunken study as the Prefect. But the quality of this production lies in the interplay of all the actors, in their attunement to the same wave of expression and in their ability to endow the protagonists with individual characteristics.
In Right You Are (If You Think You Are) Dejvice Theatre has added a title to its repertoire which is gratefully received by audiences who can expect to be reliably entertained by it, among other things, through its richly applied Sicilian backdrop. For more perceptive viewers, it will also offer a reflection on the more serious symptoms of a morbid obsession with dissecting other people’s lives.”
Radmila Hrdinová, Novinky.cz