A play about people who get stuck in a lift 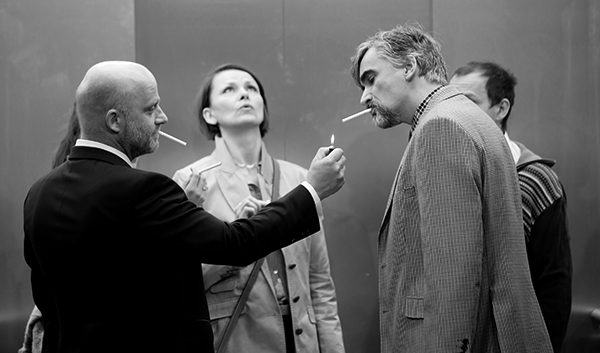 A play about people who got stuck in an elevator – that is the subtitle as well as the main theme of the production Stuck. Five characters who are forced by circumstances to stop and stay together inside a space of two metres squared, without knowing when or whether they would get out of it. It is important not only to find out why they got stuck in the elevator, but it might be more important to realise what needs to happen for the elevator to start moving again. The play was written by David Doubt, younger brother of Doyle Doubt, author of Dejvické divadlo’s production The Black Hole. As the ones in the know might have guessed, the script of the play was created in a way similar to that of Jiří Havelka’s performance eight years earlier, that is as a cooperation of all members of the team. There are seven people hidden under the name of David Doubt, the most important being „the one who put it together“, as Ivan Trojan, the debuting director of the production, likes to label himself.
He invited four of his fellow actors, costume designer Katarína Hollá, stage designer Pavol Andraško, dramaturge Eva Suková and musician Matěj Kroupa to participate on the creative process. Kroupa not only composed the music but he also plays one of the five characters who got stuck somewhere between the 12th and 11th floor…