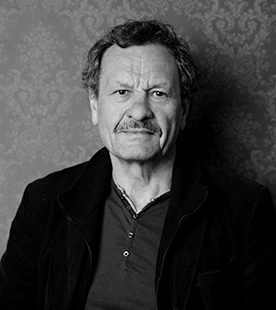 After studies on Janáček Academy of Music and Performing Arts in Brno, Miroslav Krobot worked as a stage director in the West Bohemian Theatre Cheb, later in the DVÚ Hradec Králové and since 1984 in the Realistic Theatre in Prague. Direction of the play Merlin, or the Wasteland was his first cooperation with Ivan Trojan. He was awarded the Czech Literature Fund Prize 1988 for this play. However, he received this prize for the first time in 1985 already for the adaptation of Vasily Shukshin’s short stories Lines on the Palm. In 1900 Miroslav Krobot became the main director of the National Theatre in Prague, where he staged his own dramatization of Brothers Mrštík’s novel A Year in the Village, for which he was awarded in 1993 the Alfred Radok Award. In 1996 he became the artistic director of Dejvické divadlo. The heart of the new ensemble was Krobot’s graduating class from the Department of Alternative and Puppet Theatre of the Theatre Faculty of the Academy of Performing Arts in Prague. This ensemble brought in the DD some of the students’ performances, among others the musical Kennedy’s Children (Oh, dear Buddha!) that was reprised more than hundred times.

The first play directed by him in Dejvické divadlo was E. A. Poe’s short stories adaptation The Soothing Method. In 2001 the role of the Father in Petr Zelenka’s Tales of Common Insanity brought him another Radok Award, this time in the Talent category. In 2005 he won the Český lev Award for the same role in the film adaptation of the play. He appeared in another movies as well, including Participants of the Trip, The Country Teacher, The Man from London, Little Girl Blue, The House or Alois Nebel, and most recently In the Shadow, Burning Bush, District League and Revival.

In 2014, he directed his first film Nowhere in Moravia. His second film as director was The Quartett released in 2017.
Apart from the work in DD, Miroslav Krobot is a teacher at the Department of Alternative and Puppet Theatre of the Theatre Faculty of the Academy of Performing Arts in Prague and cooperates with another theatres as a guest director.
At the end of 2013/2014 season, Krobot stepped down as Dejvické divadlo's artistic director, a post he held since 1996. Nowadays he is a member of the ensemble as an actor.