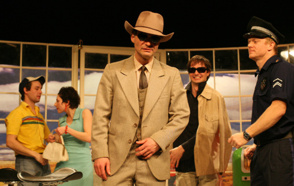 Black hole could be anything. Among other also a cosmic formation, which detached itself from our outer space and represents separate world. Black hole sucks in entire substance from its surrounding. On edges of black holes time stops. A production created on the basis of “directed improvisation” of the cast plays with the abilities and possibilities of human perception of time and space, reality and subconscious. It portrays an independent world, which is governed by different rules then we would most probably expect. But it is the world in which we are living right now, only we perceive it differently.
Black hole is a play, which reminds us through strong theatrical means and experience, that nothing is unambiguous; everything can be many times different. One tiny movement, slight hesitation or only a thought and everything changes, including space and time, among others two unsubstitutable magical components of theatre. We shall find ourselves together in one unidentified petrol station in the middle of a dessert, where anything can happen. Nobody never knows…


…In the new piece at Dejvické Theatre the stage is transformed into a black hole, where as we know fixed perception of time or space does not apply. Still we do not submerge into a land of sci-fi, but it is a gusher of pure theatrical playfulness, a purgatory bath for the company as well as for the audiences. An acquisitive intellectual as well as an ordinary theatre-goer indifferent to physically-dramatic starting points of the production will come into his own, but the latter will gladly allow himself to be enraptured by a chain of micro-comedies set in a petrol station in 1970s America …


…Theatre time and space are handled here as diffusion and mergence of reality with fiction; they are real and artificial at the same time, capable of portraying the existing world and simultaneously perform it as a totally imaginative one, where nothing of the rules and conventions of real being apply. On such intellectual basis the primary, basic, decisive and also suggestive theatre quality rises: the playing of the actors. This production does not tell a story, it does not create a thrilling action nor does it communicate topics. It is a kind of gaming as well as playful penetration into the essence of a creation of a character as a theatre-made human being …

Length of performance: 1 hour 30 minutes with no interval