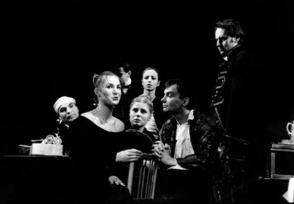 The theatre adaptation of Goncharov's novel are most precisely characterised by the author of the dramatization and the director himself, Miroslav Krobot: are the words by the author of the adaptation and director M. Krobot: It is a remarkable story about love, but also the title character of Oblomov is very inspirational. Freedom of a man is usually defined as a demonstration of an independent will to choose one's own goal. Oblomov’s independent will is shown in the fact that he has not chosen any. He lives for the moment. He is kind, tolerant, playful, with great imagination, but also irresponsible and indolent. He is shallow and deep at the same time. There is something visionary about him… We attempted to create a drama form that would best correspond with the development of the characters. We had to come up with and evolve other characters from the novel, such as Tarantyev, Alexejev or Anisja. The result has four acts and could be called a tragicomedy…


…The young company has shown us a story about stagnation of a man’s destiny viewed through a prism of kindly cruel humour. Finely measured irony touching all characters (least of all Oblomov) does not deflate, but “thinks” about the foolishness of human direction. Defensless and awkward Oblomov is the only one here who is truly able to think and reflect the moment….“


…The significant portion of the success of Oblomov as the production depends on Ivan Trojan in the title role, but also on all his acting partners. Trojan as a type is no Oblomov, but he managed to create his bitterly funny farmer very vividly and boredom drips off him like honey off honeycomb. I would say that an acting performance was born that will aspire to some award when last year’s acting will be judged…“ (I. Trojan was awarded the prestigious Thalia Award for Best Actor in 2000.)