A story of a man who changed the face of modern music forever. Dedicated to Robert Moog 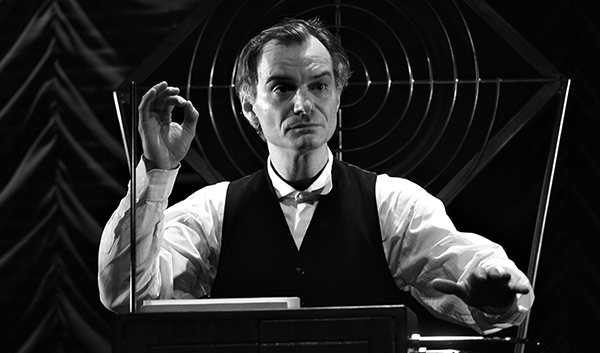 The play is based on the life story of a real person, Russian scientist, musician, and also a secret spy Lev Sergeyevich Termen, a man without whom Robert Moog, according to himself, would have never been able to construct a synthesiser.

Lev Termen lived through most of the 20th century (1896–1993) and his life would deserve to be entered into the Guinness Book of Records if there was a chapter: a man with the most remarkable life story.
He was born in Petrograd, studied engineering as well as violoncello. Since the early 1920s he devoted himself to perfecting his own invention (thereminvox) which was originally constructed as an alarm and as such presented even to V. I. Lenin in his study room. This unusual device producing tones on a principle of electromagnetic waves intrigued Lenin in such a way that he sent Termen on a concert tour around Russia, at that time in the middle of a civil war. Lenin saw the thereminvox as a perfect instrument to promote his plan of the electrification of Russia. And thus an inventor transformed into a musician for whom his instrument became his life-long fate.

Petr Zelenka’s play is set between 1928 and 1938, the years that Termen spent in the United States where he made a triumphant arrival, thrilled audiences in sold-out concert halls and managed to launch a serial production of thereminvox. However, his popularity wained after the Stock Market Crash, he also went through a divorce with his first wife followed by a secret marriage to a black dancer. He eventually returned to Russia in 1938 under unknown circumstances. Although his friends in the U.S. were convinced that he did not survive the atrocities of Stalin’s concentration camp Magadan, Termen returned from there after a year thanks to aircraft designer Tupolev’s intervention and worked for the Russian secret police until a very advanced age. He died in 1993 at the age of 97.