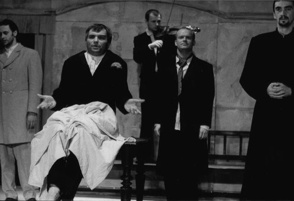 The work of F. M. Dostoyevsky is thanks to its timelessness and amazing ability to portray the characters in limit situations in life a constant inspiration for artists in other genres. Theatre adaptations of his novels and novellas have become a part of theatre repertories home as well as abroad. The Dejvické Theatre production based on the dramatization by Evald Schorm does not attempt either to meditate in detail the epically extensive novel chronicle, nor does it endeavour to create a detailed psychological probe into the heart of human soul. The creators of the production understand their view of Dostojevsky mainly as the portrayal of a man’s attitude when in conflict with the surroundings. On the background of revealing the circumstances of a parricide, they articulate their perspectives on themes that keep exciting us. Conscience, honour, love, guilt, punishment as well as the eternal question whether and when everything is allowed or if and when everything can be forgiven.
The strength of the production definitely accentuated by the striking acting of the leading actors: Ivan Trojan in the role of the old Karamazov, David Novotný, Martin Myšička and Igor Chmela as his sons and Radek Holub as the bastard Smerdakov.

…The Brothers Karamazov by F. M. Dostoyevsky is a subject that suits a classic theatre as well as studio space. The latter is closer to the interpretation of the play in case of Prague’s Dejvické Theatre… Schorm’s dramatization came to life thanks to “son’s generation” with vehemence to show conflicts of one of the vintage realistic works of Russian literature as a direct clash of natures, characters, contemptibility of uneducated societal sample of the family of farmer Karamazov, who rampantly and with shameless vulgarity of own sordidness tries to control his sons. … The company of Dejvické Theatre, after few seasons of concentrated work…has, thanks to their acting balance and ability to conquer more and more challenging productions, entered into the optimal time of creative maturity.


… Actors play with their characters, experience is almost forgotten. It may be an easy method, but the result is in fact even sadder (not harrowing) – there is no space for compassion …